Last Monday was the official start of half marathon #7 training! As of today, one week down – 11 more to go before the Cleveland Rock n’ Roll Half Marathon.  As I mentioned in my recap in May, I didn’t train very well… I’d like to think I am off to a better start this time around.

Here is my week breakdown:

I gained a little extra inspiration when we went to support a friend’s brother at his movie premiere on Wednesday night called “Running the Edge.”  It premiered in Cleveland at Capital Theater, the film follows the journey of a man and his family while he works to break the record for running the Colorado trail…which is 468 miles long.  His goal was to complete this in 8 days, 7 hours and 17 seconds, running anywhere from 12-14 hours a day and getting minimum sleep.  It was incredible, his determination, time spent and self-discipline it took to accomplish this was beyond motivational.

Friday, I was able to try out the local spinning hot-spot, Harness Cycle, for a co-worker’s “Bride Ride Happy Hour” … a sweaty hour work-out + happy hour afterwards, was my kind of night!  The spin class was a lot of fun, especially with all the girls from work!  Not to mention it was a challenging work out (which I am always game for), mainly because it was really different from the spin classes I am used too. This class made you work your body more in tune to the beat of the music … and good music at that! I have always been a fan of group classes, because they help me stay motivated and push myself harder than I would if I was working out alone. I am definitely hoping to get back to Harness, the work out was great, and their studio is beautiful!

Are you training for a half marathon, or any kind of race?  What keeps you motivated?

Yesterday I finished my 6th half-marathon, which helps me cross off one of my NYE resolutions for 2014!  (And I will be running my 7th half-marathon and potentially my last this October!)  Before, during and after every half-marathon, I always ask myself… “Why am I doing this?”  and every time I have a different answer.  Sometimes it’s because I like challenging myself, physical and mentally and other times I am trying to beat my own goal.

If you’re not a runner, or if you’re not a long distance runner, the sounds of running 13.1 miles for essentially 2-hours sounds crazy ridiculous.  But when you tack on 12-weeks of training that includes long weekend runs (10 or 11 miles) you might think that is even more crazy. Well yes, it is.  Unfortunately this race, I struggled both in training and on my actual race (because I didn’t train enough).  I am still trying to find the balance between work, life and my workout life, it has been a roller coaster this year, but I am confident and determined!

This year, the Cleveland Rite Aid 10k, Half and Full Marathon had a new route around the city – which was really great, moderate hills and a change of scenery.  However the last 3 miles down the shoreway to the finish were tough!  To add another twist on running 13.1 miles I decided a few days in advance that I would try and live tweet during my run, and I did! #emrunscle2014

Here are a few in case you missed them: 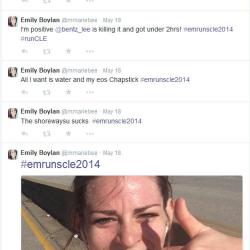 After every race, it is hard not to feel extremely accomplished and this race was no different! Especially when you check the time and see it’s 10:30am to realize you’ve already run 13.1 miles and finished a free beer, wouldn’t you feel accomplished? Or just me? 🙂

If you are planning to run a half marathon here is the training routine I use, it allows for a mix of running and strength training, which is VERY important. These routines also allow for a variety of levels including beginning, intermediate and advanced, even a walking program!

I hope to document my training for my upcoming race in October, although that won’t be until end of July… and I hope to be able to train better to end my half-marathon career with a bang and lucky #7.  Of course I plan to have updates before then! Much fun is looming in my future, our friends are getting married this weekend, we will be traveling to NYC for an upcoming weekend – just to name a few! 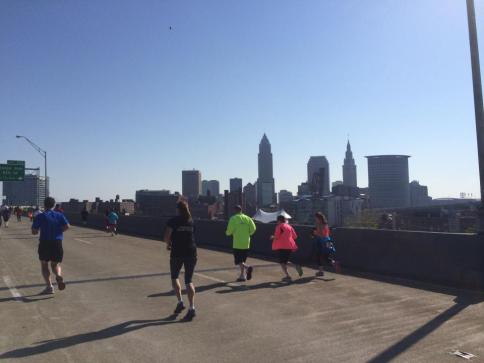 A part of one of my latest posts – back in February – eeek. I ranted on about my pathetic unemployment scare, fearing I wouldn’t get a job, especially before my 23rd birthday on March 16th.

Well… I didn’t get a job before my birthday, but I got the offer I had been waiting for, the first week in April. I landed my starting dream job at a local ad agency, as an Assistant Account Executive. I tell you I waited over a month because I had my first interview on March 1st… second one on March 6th… third one on March 7th… and then my fourth interview right after Easter when I was offered the position. Full-time employed, ladies and gents.

I was so excited I bought cake pops!

Here are some more highlights since then:

So this past December a group of our friends decided to have a Couple’s Costume Christmas Party. Yes I know what you’re thinking… THAT SOUNDS LIKE SO MUCH FUN. Well it was. So to keep with the tradition, I thought, why not celebrate Christmas in July?

Not to mention I was staying at my aunt’s house while they were on vacation, dogsitting, so I could truly entertain!  I made one of our party favorites, festive red and green jell-o shots. But here is the kicker, with pop rocks – best idea ever, thank you pinterest. I also made a killer beer cheese dip and brownie kabobs. We played plenty of rounds of beer pong.

I can’t wait till our December Christmas Party!

Me and Bentley trained for and ran two half-marathons, four weeks apart from each other. Our first race was September 8th, The River Run through the Metroparks.  We started training end of July so that we could get a full 12-weeks in before.

The morning of the race, the weather was perfect, cool with a gentle mist falling.  We ran together the whole way until about Mile 11, then I cranked up the pace to try and beat my 2 hour mark.  I finished in 2:00:54. Bentley finished shortly after at 2:05:18. Both VERY respectable times if you ask me! 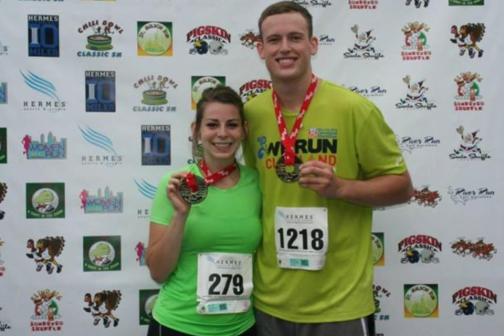 Our second race was in the beginning of October, on the 6th – the Inaugural Rock n’ Roll Half Marathon. I was really excited for this one.  There is just something about running through the city and the surrounding suburbs with crowds cheering you on along the way, a band rocking out at every mile, and cheerleader squads too!

My parents came into town to walk the ‘Mini Marathon’ which was a nice 5k – a few of my aunts and uncles accompanied them.

Bentley and I had a great pace in the beginning, we were killing it. And then at mile 10, there was a 80 degree angled hill that just about everyone walks on.  I was bull-headed and wanted to run the whole thing, only to look back to see Bentley walking.  I was bound and determined to finish this race with Bentley, as so many races we have run together – one of us usually ends up leaving the other behind. 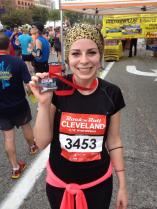 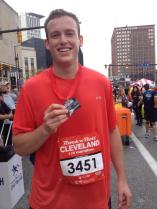 We trained together. So we were going to finish together – despite Bentley’s immediate wishes. He wanted me to keep running, but I stuck with him to keep him motivated and rocking through.  Running 13.1 miles is no easy feat, even when you have trained for 16 weeks.

We ended up crossing the finish line, hand-in-hand and finished at 2:04:16. It is always the best feeling of accomplishment when you finish a race. Just need to figure out which race to sign up for next…

Bentley and I got away for a weekend at my aunt’s cabin, in the middle of nowhere just as you enter NY from PA.  It’s the perfect retreat.  We brought their dogs, Opa (the puggle) and Maya (a black lab) with us too!  We played corn hole outside, went for a run in town, got amazing and cheap homemade local ice cream.  We also drove a short distance to nearby Lakewood, NY – to go to Southern Tier Brewery.  We got a head start on some Pumking, fresh! It was so good, and the brewery was beautiful.  Unfortunately we missed out on a tour, as they were all booked by the time we got there. We can’t wait to go back and visit next time we are in the area. 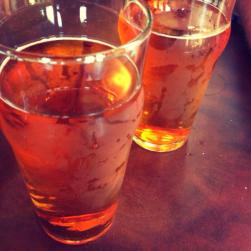 We were lucky enough to get a few “Weekend Getaways” by going to visit my parents in Upstate New York.  We were able to be in town for my Mom’s birthday weekend – which meant that we went to a local brewery for some beer tasting with a bunch of friends/family! We went to Honeoye Falls Brewery, they had a lot of beers on tap to sample!  My brother and his wife came into town from the DC area that weekend also, so it was so great seeing them.  My Aunt Laurie, my bff from high school Katie and her boyfriend came, and then three of my brother’s high school friends came to the brewery.  It was so great catching up and seeing everyone! 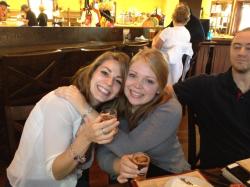 Thanks for reading my nonsense.

The Rite Aid Cleveland Half Marathon 2012

This was my second year running the CLE half, my third half marathon overall. And I ran it with one of my favorite people and one of my biggest supporters! I don’t know if I would’ve been able to finish as good as I did without him by my side! Finished just over 2 hours, even with the 70 degree weather at 10 o’clock in the morning! 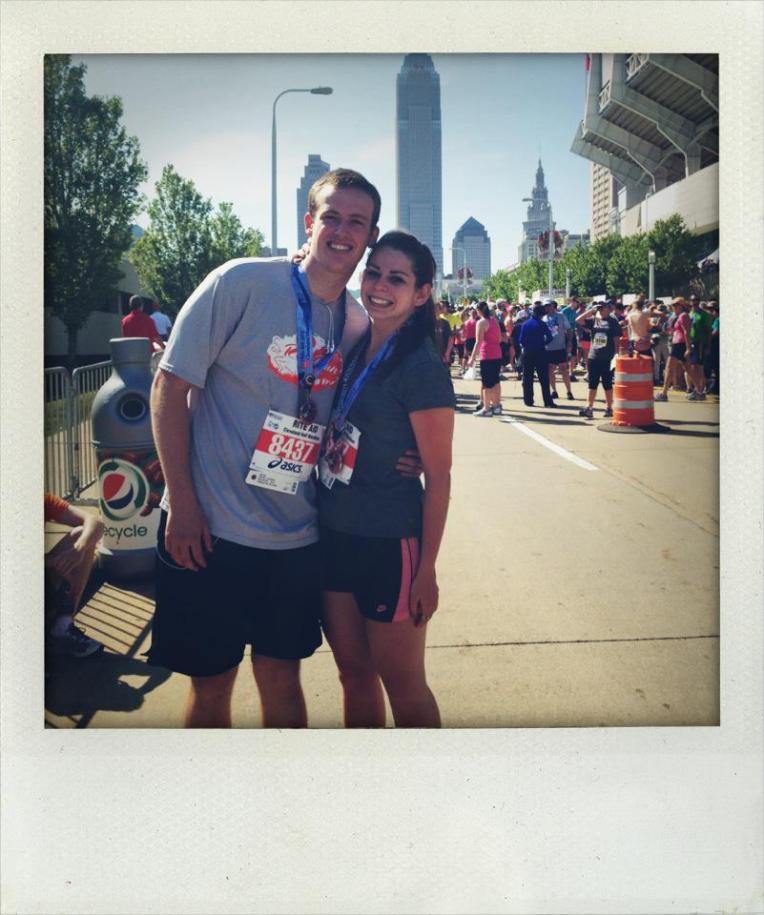