This past week, B and I traveled out west to Denver, Colorado!  It was our first time out there (well being anywhere besides passing through DEN) so we were really excited to go explore a new place and get out of town for a long weekend. We were able to explore and see a lot of Denver, at least I think for the short time we were there, but still felt like there was so much more we could’ve experienced and saw.  Since we did cover off on a lot, a recap on the important stuff… food and beer.

Historians Ale House – Broadway St.: We visited Historians our first night in Denver, and met up with my cousins there – otherwise would have never found this spot.  They had a rooftop patio that we were able to enjoy, it was a beautiful night.  We snacked on chips, salsa and queso – the waiter said the queso was to die for.  And then since it was dollar taco night, decided to have a mixing of fish, beef and chicken tacos! They were almost bite size, so it was good that we all ordered a bunch. It was a fun spot, and great atmosphere but definitely in line for a bar atmosphere and menu offering. 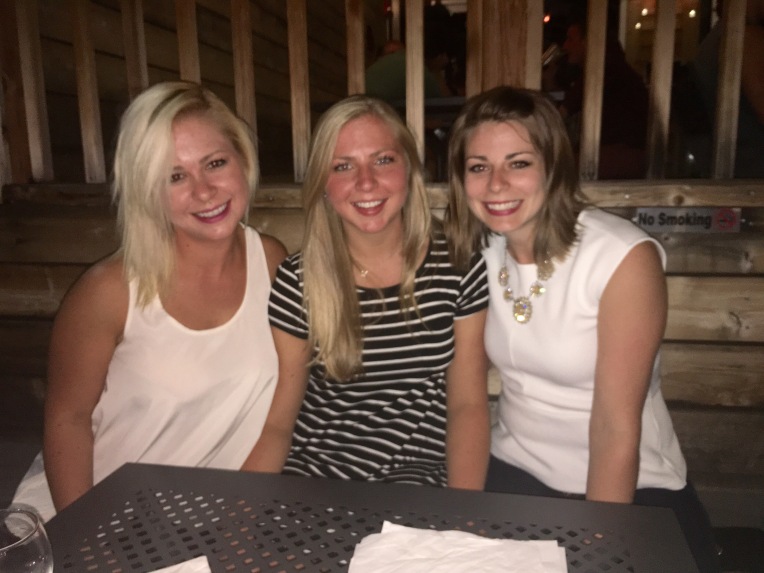 The French Press – Lakewood, CO: Although we were only able to have breakfast here once, this small little cafe across from our hotel was the perfect spot for breakfast, a great cup of coffee and a fun homey atmosphere.  There were so many good sounding items on the menu that it was hard to choose.  We had high hopes and intentions on returning the next day for a different menu item, but unfortunately had poor planning and time management to enjoy it again!  They also had lunch and happy hour specials for people to take advantage of beyond the morning breakfast offerings. For our breakfast; I opted for the French toast, which came with eggs and bacon and I added some fresh strawberries on top, it was served with graham cracker syrup, yum!  B went with “Sterling’s Sweet Biscuits” – toasted chipotle butter biscuits, topped with chorizo gravy, cheese and eggs with a side of potatoes. YUM!!

Bruz Brewery – Denver: We visited the recently opened (we were there for their grand opening), Bruz Brewery since it’s close to my aunt and uncles place. Rested in a new development this spot is prime real estate for this up and coming area. Not to mention; dog friendly both inside and out!  They had about 12-beers on tap. Since we only visited for a quick drink I went for the Summerfield Saison and B had the Dawg Daze IPA. I can’t wait to see how that brewery grows and expands, especially in their spot. The best part about visiting Bruz is that we were able to do so with my aunt and uncle and two cousins, while trying out a new spot (that we would’ve never known about).

Tivoli Brewing Co. – Downtown Denver: We were introduced to Tivoli Brewing Co., for the welcome reception Friday night before the wedding (the reason we traveled to Denver).  We were welcomed by a lavish spread of beers and bite-size treats; everything was to die for. Our spread included the; High Five Chicken Potstickers, Parmobello Mushrooms, What the Buck Bavarian Pretzels, Sweet Hot Brussel Love, and mini 2 Pigs in a Sleeping Bag. Seriously everything was SO good, we were snacking and sipping all night. The beer selection was impressive (and overwhelming – at least to me!), I stuck to their Tivoli Helles, it was a golden hued lager. Their atmosphere was fun and underground-esq.  They also had amazing city views from their large outdoor patio space – also a prime spot for baseball fireworks viewing. 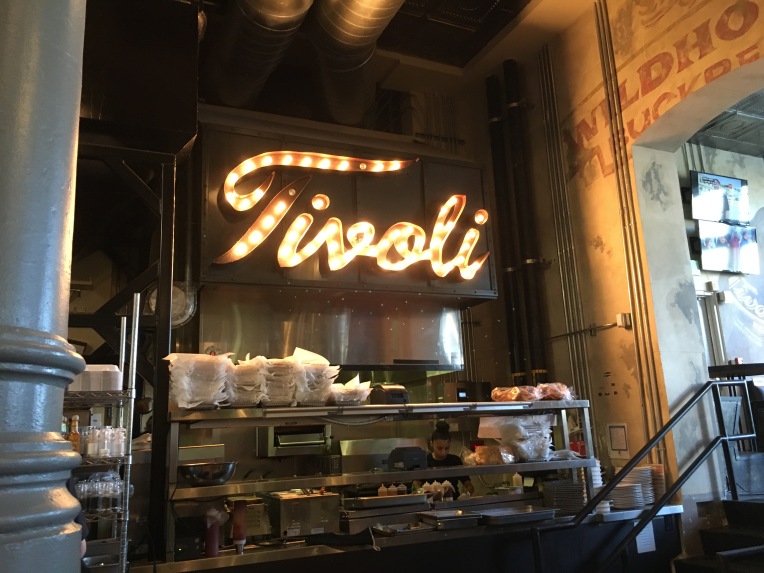 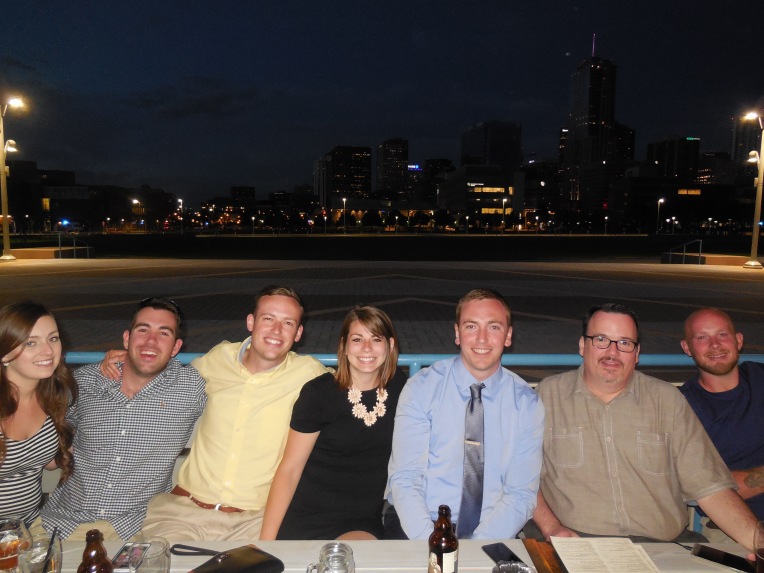 We enjoyed Tivoli so much (and it was super close to the hotel everyone else was staying at) that we killed some time for a light lunch pre-wedding on Saturday and enjoyed some more beers. I opted for something new and tried the Seasoned Skirt Steak and Chargrilled Chicken Vindaloo tacos – they were both topped with gucamole, fresh cilantro, red onion and queso fresco.  B went ahead and ordered the fullsize; 2 Pigs in a Sleeping Bag and a side of fries. 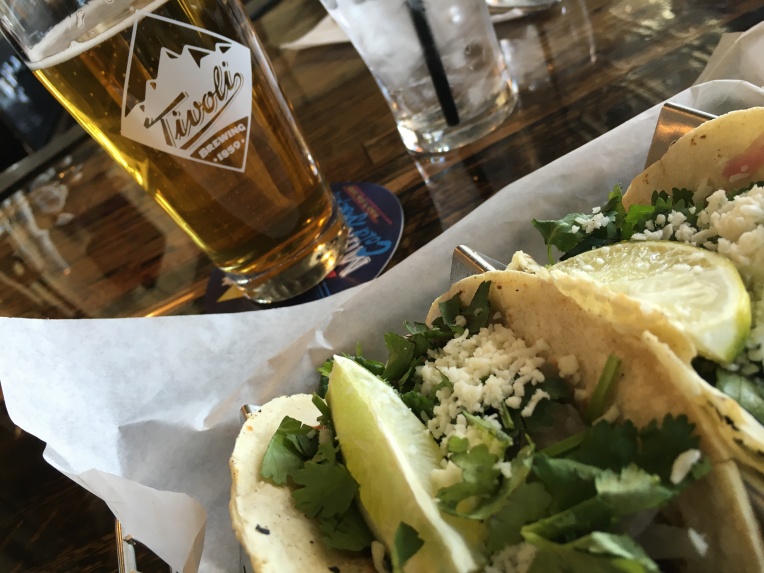 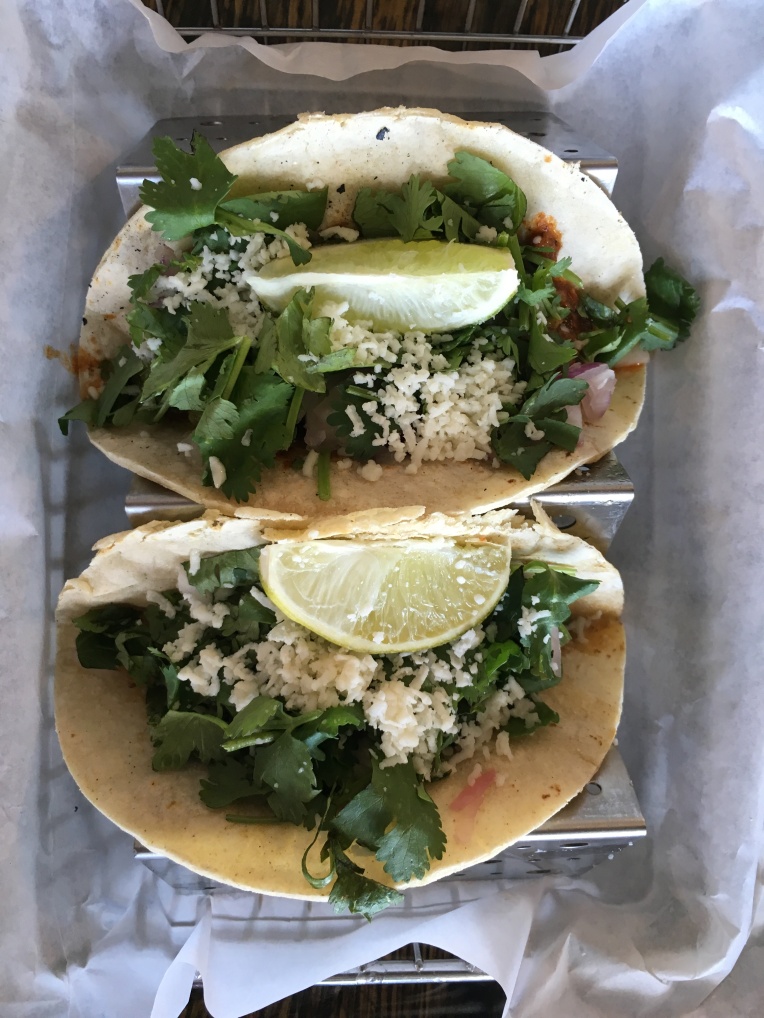 We would’ve ate more and explored a few other spots if we’d had more time between wedding festivities and trying to be tourists and see some sights. But we had a good mix and spreading of foods.  Next time we’re in Denver we will definitely spend more time downtown on “brewery row” – at least that is what I am calling it, a few people had described it as such and sounded like a must!

Any favorites spots or recommendations for our next trip out to DEN?