I can’t believe I went to the World Series.

Last night was full of pinch me moments it was all so surreal. Knowing we had Game 7 tickets at the beginning of the series was exciting but also a bit daunting, hoping we would wrap it up before, but at the same time I had a feeling we’d be going.  The entire night will never be forgotten, but these were the highlights.

1 – Pregame Drinks at Azure:  Since we were with the aunties we had to go all out in style and of course grab some drinks at the rooftop bar.  The views of downtown and stadium were amazing, just when I thought I’d seen CLE from all angles, there are still more breathtaking views! B and I also got to met Richard Jefferson from the Cavs! He was so friendly and took a moment to say hi, shake our hands, ask our names and listen to us act like giddy school girls. It was a hopping spot, definitely will want to go back when it’s a bit less crowded. 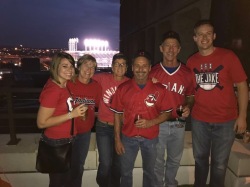 2 – The National Anthem: Singing the National Anthem and God Bless America at the opening of Game 7 at the World Series was full of goosebumps and good feels.  It was a moment of unity in a sea of Indians and Cubs fans and it was amazing.

3 – Two Outs, No Problem: There were multiple times in the game where our boys got into a 2-out situation with no runners on base and in need of some RBIs. But it seemed like that was when we really thrived when the odds were stacked against us. 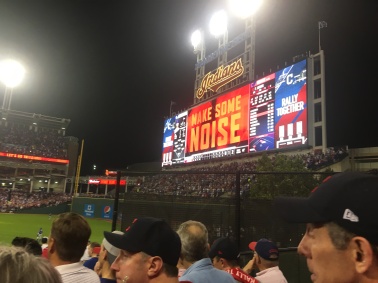 4 – Bottom of the Eighth: Two outs, down by 2-runs and Davis hits a homer bringing in 2-runs and tying up the game, 6-to-6.  That moment in the stadium was electric; it was what we had been waiting for, what we knew was going to happen. It was amazing.

5 – Being With Family: Even though the game didn’t turn out how we wanted, I wouldn’t have wanted to be at the game with anyone besides my aunts, B and the Pauls. My aunts are the reason why I came to Cleveland, why I came to love this city and why I now come to call it my home, and that all started with baseball games at the Jake. 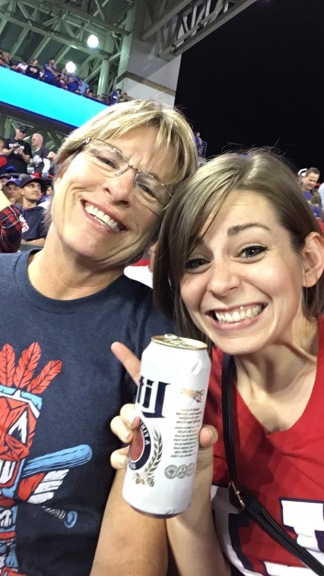 Because we’re from Cleveland we are tough and we work hard, we break molds and challenge the norm.  This is one more moment in our history as a city that we will never forget, that was memorable and amazing all at the same time.

One thought on “World Series – Game 7”

love our little fam. 🐶👫🤍
One of my favorite little moments from the holiday season is still holding on.
The season of snuggles. 🐶❄️
A merry and magical little breakfast nook.✨
Lucky to have cousins who are more like sisters. ♥️
Blurry pictures after midnight.🤍✨🍾