This past week, ended an era for me.

Since I was 10, I have been going to Yankee’s games every summer in order to see my favorite player, Derek Jeter… and the Yankees play. I have been very lucky and fortunate to have once in a lifetime opportunities with great seats, field access for batting practices, dugout suite seating and even going to both Yankee Stadiums.

I can’t explain why I am so fond of Derek Jeter, but ironically one word does come to mind and that’s Respect.

Derek Jeter has played this American pastime with integrity, loyalty, and the utmost respect for  the game and his team.  Derek has played for the Yankees for 19 years… 19 years! I can’t recall any baseball player, ever, in history of baseball who has played on one team his entire career.  He has stayed out of drama and the lime light, off of social media and on top of all of that, he has broken countless records.

Here is a run down of a few:

On top of all of that he is a stand-up guy, especially to his fans.  I have had a few close encounters with him and he responds and acknowledges very politely. Even this season he has been signing autographs before games at each of the stadiums for his fans.  I’ve been lucky enough to get his autograph twice, and he even handed me his sweaty-wrist band after a blow-out against the Indians in 2006. And then the occasional, “Hi, how are you doing tonight?” with the hat tip or a wave. (Because I am that person decked out in Jeter gear, yelling to him!)

There is another thing to be said about him. As much as you may hate the Yankees, for whatever reason, most people find it hard to hate Jeter.  I heard countless people at the games this past week saying just that, adding that they had to come see Derek Jeter play in person… one last time.

This past week, I was extremely sad, yet very happy and lucky to be able to go to all 4 games for the Indians vs. Yankees series.  It was bitter sweet. I have had so many unforgettable memories and great times watching Derek and the Yankees play – it’s been a yearly tradition for nearly 14 years, and it’s now sadly ending.

Derek is truly one of the best baseball players of our time, he is a stand-up role model. The game of baseball won’t be the same without him, at least not for awhile.

So, if I could say one last thing to Derek Jeter, although I would love to say many… one thing would be… Thank you.

That time Derek Jeter slipped off his sweat band and handed it to me after a game. 2006 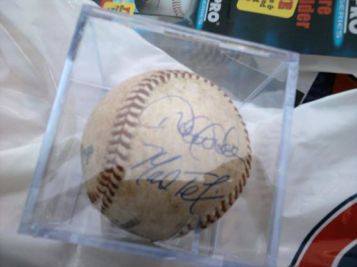 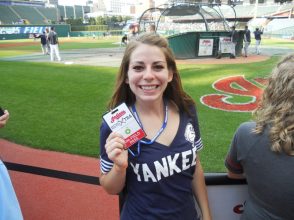 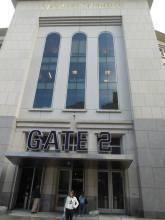 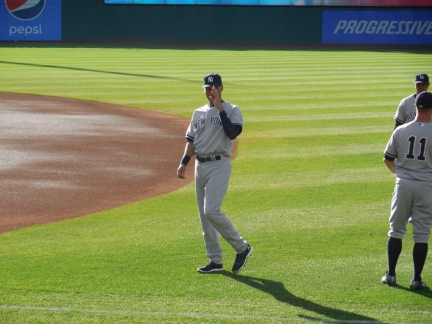 One thought on “My Farewell to the Captain.”

My American dream. 🇺🇸🥂♥️
Summer mornings. ⛳️☀️
Spent our Saturday exploring Battery Park and checking off another spot on our Summer bucket list, which we were told is the only patio in CLE that plays house music. 🙌🏻🤩💕
Routines. Morning rituals. They help us devote a small portion of our day strictly to ourselves. 🙌🏻
N I N E !!! 🐶🤍🎂🥹
We found the perfect patio and pizza for a Friday date night! 🍕🐶🥂